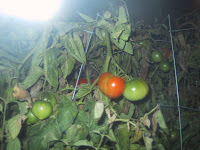 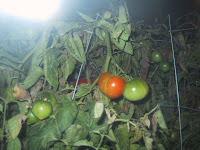 As it turns out, I might not have been prepared for the responsibility of tomatocam and its heavily followed blog....It took me four days to reassemble the thing, then I couldn't bear the thought of wasting another battery--so I used the old one--we did get 2 new pics out of it though before it died for the night.
Also, since there has been no damage in the old zone, and I picked most of those tomatoes anyway, I decided to reposition the camera to a different grouping.
There is a really good chance that the mere presence of tomatocam has scared off the predators--so in a way we have succeeded--but it doesn't seem as satisfying as catching the bad guys, then being in a moral quandary about what do about them anyway.
The other problem is that I asked for help way too late with this situation (hey, but at least I asked!), my plants are wrapping up their season and I might just put them out of their misery soon.
In fact, a certain other blogger and I were discussing the possibility of some sort of fried green tomato feast so that their tomato lives would not be in vain....stay tuned on that one...
Also---I've been waiting several days to say this--but I thought the debates on Friday were slightly more boring than looking at tomatocam pics--Just Sayin'!!
Posted by pherface at 12:36 PM